Which Country Has the Largest Dog Population?

Dogs can be found in almost all countries, and in some, they’re treated as part of the family.

But which countries have the most dogs by sheer numbers?

Which countries have the highest number of dogs per 1000 people?

And where are the most dog-friendly places on earth?

The United States of America

The USA has the most dogs in the world per capita – as of 2021, there are 274 dogs for every 1000 people, and the vast majority of those are considered pets.

As for sheer numbers, the latest estimate is 90million dogs, which puts the USA just behind China.

Americans are big spenders when it comes to their K9 friends; data from 2020 reveals that the average dog owner spends just over $1200 per year on the basics: 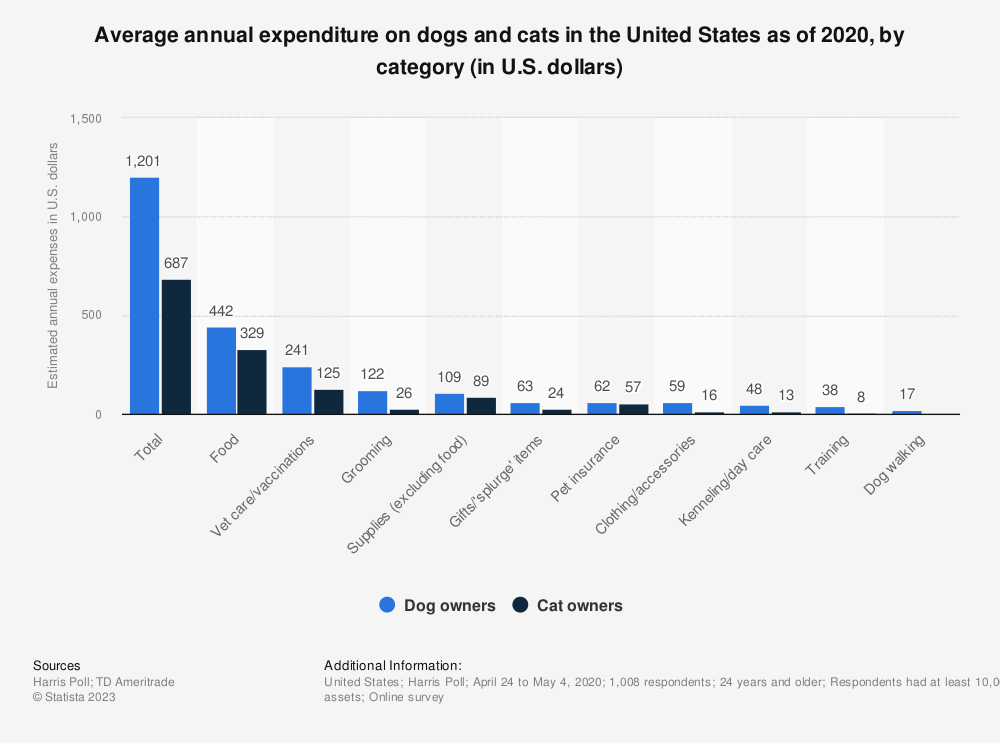 See how these figures from Statista compare to our research into dog ownership expenses.

While the USA ranks at the top for the number of dogs per capita and in second place for sheer numbers, it doesn’t even come close to making our list of the worlds most dog-friendly countries.

With so many dogs, authorities in many states enforce strict conditions on where dogs can go with designated on-leash and off-leash areas. Unlike in many European countries, it’s illegal to take a dog into a restaurant or any dining area, although some states allow dogs to enter an outside patio area where food is served.

Pets are only allowed on public transport if they’re stored in a safe carrier.

Unlike east Europe and many other regions worldwide, the USA has a small number of street dogs, and their numbers are controlled, usually by capture. However, the USA also has a high number of dogs in shelters and a high rate of euthanasia which is considered unethical in many countries, some of which have banned euthanasia of healthy dogs.

China has more dogs than any other country, but with a human population of over 1.4 billion, it has a below-average number per 1000 people.

A considerable number (up to 40%) are strays, and in rural areas, many dogs are used as yard dogs that rarely come inside the home.

The number of dogs in China has more than tripled in just over a decade, increasing largely due to improved economic conditions and citizens having more disposable income.

Contrary to some western perceptions, the Chinese rarely eat dog meat, if at all. While it is a delicacy in some restaurants, it’s not a pillar of their diet and is seldom found in shops or markets.  The annual dog meat festival in southwest China makes headlines each year, but most of the dogs are strays or stolen; there’s little evidence of dogs being farmed in the same way other animals are.

With so many strays, a high number of yard dogs and a low number of dogs per capita, China didn’t come close to making our list of the most dog-friendly countries.

With over 55 million dogs, Brazil makes it into our top 5 for both sheer numbers and per capita.

This huge country can be split into two categories; city dogs and rural dogs.

Brazil has the highest number of small dogs per capita than any other country, with apartment owners and city dwellers making up most of the 55% of dog owners who keep a dog under 20lbs.

The vast majority of rural dogs are either strays, with some even forming packs, or they’re yard dogs that rarely come into the home.

In eastern European countries, rural dogs are often kept as yard dogs, and in countries such as Hungary and Romania, the stray population is uncontrolled.

In contrast, western European countries have some of the lowest stray populations in the world, and such dogs are usually rehomed. In Germany, for example, it’s illegal to euthanise a stray dog without a medical reason to do so. Dogs in western countries typically live inside the home and are rarely kept solely as yard dogs.

Some western European countries are so dog-friendly that they’re often permitted into restaurants and holiday cottages, and even onto public transport, while most parks, beeches and outdoor areas are also dog friendly or have dog-friendly sections.

In Switzerland, the government even recommends and offers training courses so new dog owners can learn how to look after their pet.

Russia’s dog population has held steady since 2014, mirroring the economy. The population is a mixture of yard dogs which are predominantly found in rural homes, a significant stray population in all areas and city dwellers who own apartment-friendly dogs.

Interestingly, a survey in 2019 revealed that 20% of pet owners admitted to picking their domestic animal from the street. Dog shelters are few and far between, and strays in rural areas are often left on the street or euthanised.

Unlike many western countries, there are significantly more cats in Russia than dogs (22.3m cats to 16m dogs).

Canada is in some respects similar to the USA, but in others, it’s closer to Europe.

Canada has a large pet dog population of 156 per 1000 people. Street dogs are rarely seen, with few yet well-publicised cases of dog-dumping. Shelters and organisations rescue dogs, and the levels of euthanasia, while higher than in western Europe, are much lower than in the USA.

Dogs aren’t allowed inside restaurants, but some allow them onto patios.

Canadians are generally very fond of pets, and some hotels and holiday cottages allow dogs, just as they do in Europe.

Canada has more dog-friendly parks and open spaces than the USA but typically has more restrictions than those in western European countries.

Australia has a very high pet ownership rate, with up to 60% of homes containing at least one pet animal.

The dog population per 1000 people is similar to that of Canada, and the number of strays, rescue shelters and overall attitude to dogs is similar to Canada.

Statistics show that those over 65 years of age are far more likely to own a pet than those aged between 25 and 65.

There are many reasons why dog populations vary from country to country, but one should bear in mind the dog population can split into three categories:

Religion: States that are predominantly Islamic see dogs as dirty animals and rarely allow them into the home or even the yard. Dogs are rarely seen in Iran, Saudi Arabia and other Islamic countries; when they are present, it’s almost exclusively in a working capacity.

Economy and Disposable Income: As a country’s economy improves, the disposable income increases and humans in many regions of the world enjoy the company of pets – when they can afford it. The increasing number of pets in China reflects the year-on-year expansion of the economy, while in Greece, pet ownership rates declined sharply after the financial crisis of 2008.

Poverty: While pet dog ownership rates increase as the economy improves, the number of stray dogs is often high in countries with considerable poverty levels. Romania has one of the highest rates of dogs per capita globally, but the majority are strays or yard dogs, with very few considered pets that are allowed into the home.

Space: Brazil has a very large dog population, and the number of pet dogs is also high. Larger dogs, mostly strays and yard dogs can be found in rural areas, while small dogs under 20lbs are particularly popular with city-dwellers.

How Much Does it Cost to Own a Dog For its Entire Life?

A Look at Kennels, Daycare and Dog Hotel Prices in the UK

Can a Dog Walker Really Earn This Much Just by Walking Pets?

All About Dogs – Our Guide to Dog Ownership + Much More

20 Incredible and Mind-Boggling Facts About Dogs

15 Beautiful Gifts for Dog Owners – Selected by Us

When Was This Page Published?

This page about dog ownership rates and dog populations was published in April 2021.

When Was The Data Sourced?

Where Did These Statistics Come From?

The vast majority of the statistics we used were from Statista. Where data wasn’t available from Statista, we relied on secondary sources such as Dogtime.

Why Haven't You Published Data For More Countries?

Some countries, particularly those in western Europe, have similar dog ownership rates, and there’s little for us to gain by researching and publishing extra data.

Also, data is hard to come by in some countries, and in others, the dog population data is published but cannot be broken down into pet, yard or stray groups.

There are several well-meaning but poorly researched guides online that state Romania is one of the most dog-friendly countries globally as it has a dog population of over 210 per 1000 people. Unfortunately, most of these are yard dogs or strays and, by western standards, cannot be classified as a pet.